A group of young people in the Morecambe/Lancaster area, who are very keen for Eden North to happen, have formed a grass roots campaign group. They have called themselves North West Youth For Eden (NWYFE). They are currently building a website which should launch in the next couple of days ( you can have sneaky peek here www.nwyfe.co.uk ) They are also making a short film which they will send to Rishi Sunak & Boris Johnsons’ twitter account and push out via their social media channels. The BBC and Lancaster University are also set to help with this push and there will be radio and possible TV coverage on NW News.

NWYFE are then going to encourage other young people and schools in the area to make films and write letters to Rishi Sunak and Boris Johnson, expressing their reasons why they want the Eden Project to come to Morecambe.

The group feel that if prizes were on offer other young people would be more likely to engage. Wilkos have just donated £200 worth of vouchers and Mazuma are discussing what they can give. It would be great if there are any other businesses locally that could donate anything that might appeal to young people and/or schools.

Who knows, this campaign could be what gets Eden Project over the line – which would be a great prize for everyone in the area!

If anyone can donate a prize for these kids please contact Jenny Natusch on jenny@escape2make.org 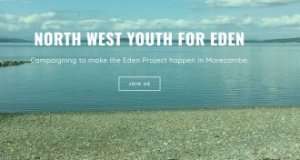