From Wednesday 22nd December people may notice a change when driving or walking down the promenade in Morecambe. For the next few weeks Morecambe will be lit up with extra seasonal lighting including 24 new programmable Christmas cones, lighting of the buildings of significance, and some public realm features.

This is all part of the 2021 Morecambe Business Improvement District (BID) Sparkle, with thanks to the Welcome Back Fund and Lancashire County Council. Earlier this year Morecambe BID, along with other partners, were offered the chance to bid into a large pot of money by Lancashire County Council and Cllr Charlie Edwards to bring the illuminations back to Morecambe. The bid document is still being worked up as a feasibility study needs to be conducted, but Morecambe BID decided to bring back the lights to the promenade for this year to preview what can be done.

Morecambe was one of first seaside resorts in the United Kingdom to introduce an illuminations scheme. They ran from 1919 until 1996 until budget cuts and safety issues caused them to be cancelled.

Morecambe cannot compete with Blackpool with their illuminations, nor do we intend to as Blackpool are indisputable world-leaders in what they do but Morecambe can offer their own interpretation in a subtler fashion and Morecambe Business Improvement District (BID) believe that last year’s Morecambe Sparkle reflected this.

This has been brought about by nostalgia and a genuine demand by the local population to have some form of light show in Morecambe over winter.

Due to the overwhelming acceptance of the initial Morecambe Sparkle in 2016, in 2017 BID actually purchased six white spaceflowers, and two coloured ones.

BID has also changed the Christmas street lighting scheme in the central business district in 2021 to incorporate icicle droppers. We continue to have a close partnership with Blackpool Illuminations (BI) as they are the acknowledged leaders in the business. After complete a engineering survey and drawings, BID came up with a permanent scheme based on low-wattage LED lights and covering the following streets:- Queen, Nelson, Pedder, Market and Victoria streets, and the bottom of Euston Rd. These lights can be changed to reflect the seasons, and they will be lit all-year round, thus enhancing night-time safety as well.

John O’Neill, Manager of Morecambe BID, said: “We have had a great lighting scheme in Morecambe for the last few years but it was reflective of our limited budget. We believe it benefits the local economy with residents and visitors alike, and adds to a sense of well-being amongst the local population.

“Should the bid to Lancashire County Council be successful then we really are stepping up a few levels as Sparkle is intended to become a pan Morecambe scheme with a variety of partners. A new, independent Community Interest Organisation called ‘Morecambe Sparkle CIO’ will be established with Morecambe BID as a partner. It will have its own trustees, committees,  as well as an Artistic and Project Director. Morecambe Town Council has already signed up as a partner, and discussions are continuing with other potential partners and sponsors.

“We need to stress that Morecambe Sparkle will not be copying Blackpool Illuminations, nor Light Up Lancaster. We intend it to be all about the district and the Bay, as well as theming it on sustainability, education and local engagement. Most of the displays should be unique to the area. There’s still a lot of preliminary work to be done but our aim is to launch at the end of 2022 with our first full display – this year is just a taster. Due to supply-chain issues this year’s lighting scheme is later than usual as we can to get the promenade cones built to spec and Covid has impacted this”.

As well as the streets lit by the icicle festoons, and our synonymous spaceflowers, the Winter Gardens, Hitchens, B&M Bargains and the Midland hotel will also be lit illuminated by the BID scheme. These schemes are provided by Brent Lees (BCL Lighting), who is also the Lighting Director at The Dukes in Lancaster and has worked closely with BID over the last few years. Additionally, Festival Market and Morrison’s car parks will be lit with the blue Christmas cones.

In addition the Welcome Back Fund, which is administered by Lancaster City Council and funded by the European Regional Development Fund (ERDF), is providing funding to illuminate The Platform, Memorial Gardens, Eric’s Statue, the Clock Tower, the Lake District panorama, and the See Wall. 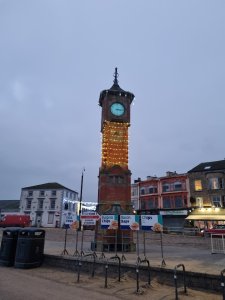 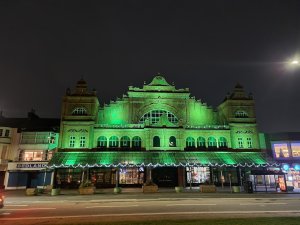 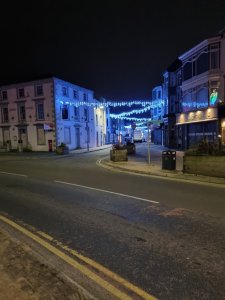 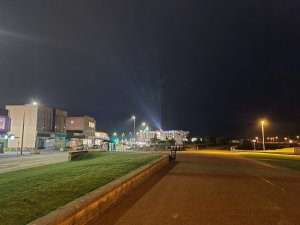 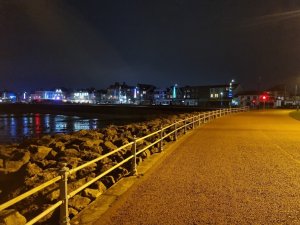 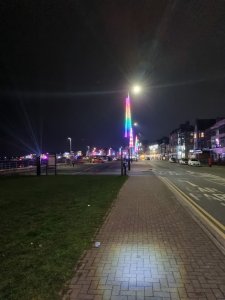 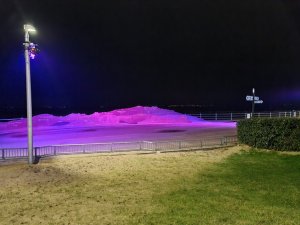 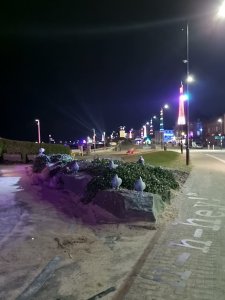 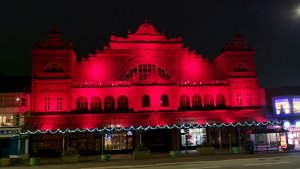 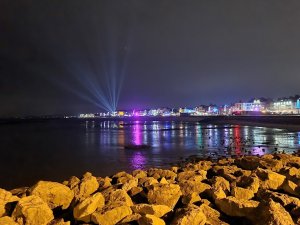