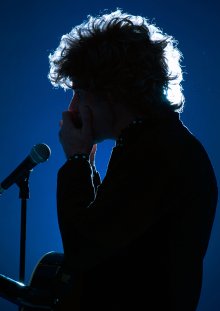 Join Bob and The Band on a nostalgic trip through and beyond 1960s America as hits including Like A Rolling Stone, Mr Tambourine Man, Blowin’ In The Wind, Knocking On Heaven’s Door, All Along The Watchtower, The Times They Are A-Changin’, Lay Lady Lay and many more are captured to perfection.

Celebrate the 50th anniversary of Dylan’s famous 1969 comeback appearance at the Isle of Wight Festival and relive the moment as we feature classics performed on that heady late summer evening … the joyous romance of I’ll Be Your Baby Tonight, the whimsy of Quinn The Eskimo, and the trademark venom of Maggie’s Farm.

An aural and visual feast written by and starring genuine Dylan fans, complete with evocative visual projections and the fascinating stories behind the songs.

“Superb …. Does real justice to the great man!” – Weekend Notes
“A brilliant performance!” – Southend Theatre Scene
“As close to the man as it’s possible to get.” – The Scarborough Review