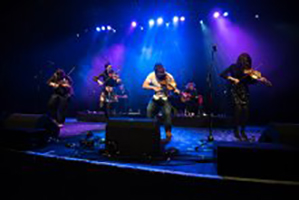 Blazin’ Fiddles are one of the world’s most prolific fiddle groups. Celebrating their 21st year in 2019 – now with nine albums and many thousands of miles and behind them, yet a passion that burns brighter than ever – no other band has quite managed to capture the excitement, sensitivity and raw fire of Scottish music all at once.

With a ‘Blazers performance comes the unique opportunity to hear the regional expressions and diverse fiddle dialects from Scotland’s Highlands and islands, and the individual style from each music. The four fiddle frontline of Inverness’ Bruce MacGregor, Shetlander Jenna Reid, Nairn’s Rua Macmillan, and Orcadian Kristan Harvey are joined by guitar and piano from Anna Massie and Angus Lyon, where fiddles and bows ignite in a blend of ensemble and solo sets.
Whatever the hall – be it in a remote Highland village or London’s Royal Albert – this legendary, multi award-winning act never fails to set the hearts of their audiences alight.

“an ensemble of class and distinction”
Fatea

“Music like this is a reminder why Hogmanay celebrations are such fun.”
London Evening Standard (four stars)

“the Led Zeppelin of the folk world”
The Scotsman